A 30-something with palpitations and lightheadedness

A 30-something male without any significant past medical history presented with palpitations and presyncope.

Here is his ED ECG:

First. Before getting into analysis, a regular wide complex tachycardia could be

3. SVT with aberrancy.  (SVT would usually be AVNRT or orthodromic WPW)

Since adenosine is safe in VT, and it works for AVRT and AVNRT, it is worthwhile trying adenosine.  Or, of course, you can always use electrical cardioversion.

Providers gave 6 mg of adenosine with no response, followed by electrical cardioversion.

This is what I texted back: "VT or AVRT. (Antidromic WPW).  I am sure you already shocked it, right?"

Next. ECG analysis: This is a regular wide complex tachycardia.  There are no P-waves.  The QRS onset is very slow. See magnified leads below.  The time from QRS onset to peak is approximately 110 ms.

This is too long for either AVNRT or for Idiopathic VT.  Briefly, idiopathic VT is VT in an otherwise normal heart and initiates in conducting tissue and therefore has a rapid onset similar to SVT with aberrancy). See this post: Idiopathic Ventricular Tachycardias for the EM Physician.

Such a slow onset is appropriate for VT in the context of myocardial disease, or for AVRT.

Here I put a lines, or arrows, at the onset (black) and end of the ONSET (blue) of the QRS.  I started in lead II at the bottom, where it is easiest to see the onset. 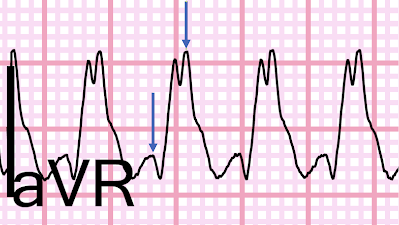 The QRS in aVR starts with a 40 ms q-wave (see the dip after the blue arrow).  The onset of the QRS ends at the 2nd peak.  Thus, the QRS from onset to peak (the initial depolarization takes about 110 ms).
This is prolonged and would not be so slow if it were through conducting tissue, as it would be with AVNRT or with idiopathic VT.

Here is the post cardioversion ECG (texted to me):

This what I texted back: "Could be WPW. You don’t always see Delta waves."

1. Good LV function means that if this is VT it would likely be idiopathic VT

2. But idiopathic VT should have a rapid onset

3. This has a slow onset, so it is unlikely to be either type of VT.

4. Finally, Right ventricular outflow tract VT, which responds to adenosine, has an LBBB morphology and inferior axis, which is not present here.

5.  Therefore AVRT is most likely, even though there are no delta waves.

This was the note of our electrophysiologist:

Why did adenosine not work?  6 mg often does not work, but especially in low flow states.  Our electrophysiologist, Rehan Karim, explains: "At this HR in general one might expect overall transit time for any IV drug to be very slow to reach the heart. Adenosine as you know has very short half life so a small dose like this probably would fade away before it would reach the target area."

Dr. Karim wrote some further key take away points are:
1. Degree of pre-excitation (“WPW”) during sinus rhythm is dependent on competition between the AV node and pathway - and is also impacted by relative location of pathway. If I live in West Suburbs of Twin Cities, I’ll probably take I-35 W rather than I-35 E unless it is blocked for whatever reason.
So if you don’t see pre-excitation during sinus rhythm, it doesn’t mean there can’t be any - as sinus node is right atrial structure and left sided pathways may not show robust pre-excitation if someone has fast conducting AV node!
2. Antidromic AVRT morphologically will meet the criteria for “VT” originating from “insertion site” of the accessory pathway- because essentially that’s where Ventricular activation is originating. Now it can NEVER have negative concordance though - because the accessory pathways usually insert at base of the heart rather than apex!

What I liked most about today's case — was the skillful use of bedside Echo in the ED by Dr. Smith to facilitate rhythm diagnosis! I'd add the following comments to his excellent clinical decision-making strategy.
At this point — the patient was electrically cardioverted, and a post-cardioversion Echo in sinus rhythm showing normal LV function was obtained.
PEARL #2: I favor addition of QRS morphology features in my considerations to enhance prediction of the rhythm etiology.
BOTTOM Line Regarding Today's CASE:
Determining the precise etiology of today's initial tracing is not needed for appropriate initial management. As Dr. Smith said in his initial comment, "I am sure you already shocked this rhythm, right?" While brief trial of medical therapy (ie, with use of Adenosine) may be reasonable if the patient is hemodynamically stable — the chances are high that electrical cardioversion will soon be needed.