Any ST depression in V2 and V3 is posterior OMI until proven otherwise, especially if downsloping

A middle aged male presented after onset, approximately 50 minutes prior, of constant crushing 10/10 substernal chest pain, radiating into right arm associated with shortness of breath. He had never felt this way before. There was a history of HTN but he was not taking any medicines.

Prehospital ECG was recorded approximately 20 minutes after pain onset and 20 minutes prior to ED arrival:

There are somewhat large T-waves in II and aVF and a sagging ST segment in aVL, suggestive of inferior OMI.
There is some minimal downsloping ST depression in V2 and V3, which is suggestive of posterior OMI.

The ECG is not diagnostic however.

There is downsloping minimal STD in V2 and V3.
The T-wave in lead II is somewhat suspicious, but is not a diagnostic OMI finding.
This is highly suspicious for isolated posterior OMI

Here are the precordial leads magnified, and the ST segments in V2 and V3 highlighted 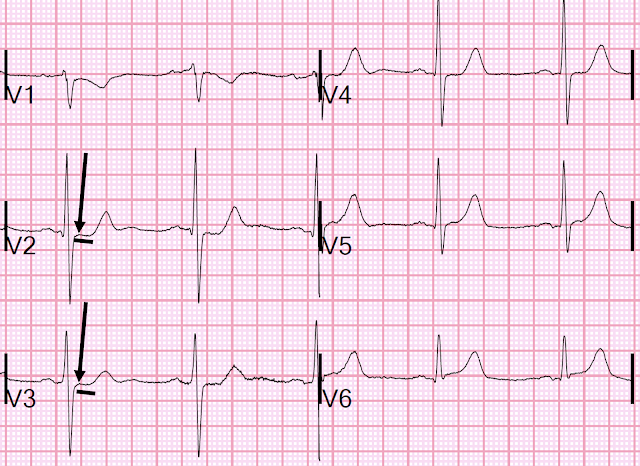 There is perhaps a 0.5 mm of ST depression in leads V2 and V3, and it is downsloping.

In our recent research, published in November 2021 in The Journal of the American Heart Association, any ST depression maximal in V1-V4 is 96% specific for OMI requiring PCI (assuming, of course the patient has symptoms compatible with ACS).

It is important to remember that the ECG in normal people without ischemia and without an abnormal QRS such as RBBB never has more than 0.5 mm of STD, and rarely has any STD at all.  The vast majority have some STE in V2 and V3.  (Macfarlane PW. Age, sex, and the ST amplitude in health and disease. J Electrocardiol [Internet] 2001;34 Suppl:235–41.)

In our study: There were 118 patients with "suspected ischemic ST depression maximal in V1-V4" (45 with less than 1 mm).  I blindly read ECGs of all 808 patients, and called OMI in 112 of these 118 patients; 99 had OMI and, of these, 34 had less than 1 mm STD.  Of these 34, 12 had STEMI in other leads, but 22 did not.  Of these 22, every one had some other subtle OMI findings in other leads.  In other words, we did not have a single patient with STD maxV1-4, AND less than 1 mm who did not have some subtle finding elsewhere, as is the case here.  On the other hand, we did have 2 patients with less than 0.5 mm STD and no other OMI findings whom I interpreted as "no OMI" who indeed had no OMI.

So the finding of less than 1 mm in V2 and V3 which is completely isolated (no OMI findings elsewhere on the 12-lead) remains highly suspicious, but not diagnostic.

However, downsloping STD in V2 and V3 is, in my experience, diagnostic.

I was very worried about about OMI from the crushing chest pain alone, even without the ECG, and I was specifically worried about posterior OMI for the above reasons.

This shows a trace of STE in V4, but not up to 0.5 mm.
I think the STD in V2 and V3 may have deepened a bit, but I did not notice it at the time.
Case continued

The blood pressure was 175/125.  This made aortic dissection a possibility as well.  We started him on high dose IV nitroglycerin up to 200 mcg/min, with sublingual NTG every 5 minutes, and this brought his BP down to 120/73. The pain persisted.  This is important: ACS with pain that can't be controlled with NTG should go emergently to the cath lab "regardless of ECG or biomarker findings!" (Eur Soc of Cardiology guidelines)

I called the cardiologist directly and stated that I thought this was ACS/OMI.  He agreed and we decided to do a CT for dissection.  If that was negative, the patient would go emergently to the cath lab.

This one has evolved and is now definitely diagnostic.
Increased STD in V2 and V3
New STE in I and aVL
New hyperacute T-wave in I
Increased T-wave size in aVL
New inferior reciprocal ST depression.
Greater than 0.5 mm of STE in posterior leads V8 and V9 (labelled V5 and V6)

The cath lab was activated.

While waiting for the cath team, another ECG was recorded at 37 minutes after the first, standard 12 lead (not posterior):

Now there are additionally hyperacute T waves in V4-V6, with some new ST elevation

The initial troponin I returned at 10 ng/L, which is within the normal range.

Aside: In our study of 925 patients with STEMI, using the same assay, the initial troponin was below the 99th percentile in 14.4%  Here is the reference: Wereski et al. (including Smith).  High-Sensitivity Cardiac Troponin Concentrations at Presentation in Patients With ST-Segment Elevation Myocardial Infarction

The troponin I peaked at greater than 50,000 ng/L, a very large acute OMI.

This is consistent with posterior OMI ("posterior" is now classified as "lateral" -- this is complicated and explained in the article).

1. Any ST depression that is not explained by RBBB or other QRS findings, in a patient with symptoms suggestive of ACS, is posterior OMI until proven otherwise.

2. Unexplained chest pain that is typical of ACS, and is not controlled with medical therapy, needs an angiogram even in the absence of ECG or biomarker proof of ACS.

3.  ST depression of posterior OMI is almost always accompanied by some other subtle OMI finding in inferior or lateral leads.

4. ST depression that is downsloping, even if less than 0.5-1.0 mm, is particularly worrisome, even in the absence of other subtle OMI findings.

5. When there is severe hypertension, all chest pain might be due to supply demand mismatch.  Therefore, one must lower the BP before activating the cath lab.