A woman in her 60s with VFib arrest and no STEMI on her post-ROSC ECG.

Case submitted and written by Sonika Raj MD, with edits by Meyers and Smith

This case shows how the COACT trial was fatally flawed and dangerous. (see references below)

A woman in her 60s with past medical history of type A aortic dissection status post endovascular repair and end-stage renal disease on peritoneal dialysis presented to the Emergency Department in cardiac arrest. She was found unconscious in her car, which had run off the road just outside the hospital doors. A bystander initiated chest compressions in the field and called EMS, who brought the patient inside. The first rhythm observed was ventricular fibrillation. She was defibrillated once and achieved ROSC. Approximately 20 minutes after ROSC, her ECG is shown below. No prior ECG was available at that time.

There is poor quality with wandering baseline, and all attempts should be made to repeat it immediately with improved quality if possible. However, I would argue there are significant findings here that are highly concerning for acute OMI involving the inferior, posterior, and lateral walls. Despite the wandering baseline, there is the appearance of slightly large volume T waves in leads III and aVF, with reciprocal negative hyperacute T waves in aVL. Leads V2 and V3 have almost definite STD (if the baseline were slightly more steady I could say definite). Lead V6 appears to show slight STE. Together, each of these findings supports the others, and the likelihood that they are only due to baseline wander is low.
Again, all attempts should be made to get a crystal clear baseline immediately, however we all know that, in real life, sometimes it is not possible to get a perfect quality ECG.
The ECG does not meet STEMI criteria, but especially in the context of a ventricular fibrillation arrest, is diagnostic of inferoposterolateral OMI. The cath lab was activated. The patient was given a fluid bolus for potential RV infarction with hypotension, and pressors to maintain goal MAP.
Interventional cardiology evaluated the ECG but they were reluctant to take the patient to the cath lab since the ECG didn't meet STEMI criteria.
Approximately 60 minutes later another ECG was recorded:

Leads II, III, and aVF have some of the most hyperacute T waves I've ever seen, as well as leads V4-V6. There is electrical artifact and I cannot exactly make out the J points, but it likely also meets STEMI criteria, but that is immaterial compared to how obviously diagnostic the hyperacute T waves are. This is inferoposterolateral OMI. Of course notice the STD maximal in V1-V2 that signifies the posterior involvement.

Shortly afterwards the patient was found to have a 100% occlusion of her left circumflex, which was treated with thrombectomy and PCI.

Here is her pre-intervention angiogram:

Here is her post-intervention angiogram:

She was admitted to the CCU and hypothermia was performed because she was not following commands after ROSC was achieved.

The second troponin I was drawn several hours later and returned greater than 50,000 ng/L. At that time we also have a CKMB of greater than 600 with a total CK of 3506.

The patient survived but long term follow-up is unavailable.

The COACT trial was fatally flawed, and now has many cardiologists convinced that if there are no STEMI criteria, the patient does not need to go to the cath lab.

Should all patients with shockable arrest be taken to angiography regardless of STEMI or No STEMI?

There has long been controversy about whether to take patients with a shockable rhythm without ST Elevation to the cath lab, and a recent randomized trial showed no benefit: Coronary Angiography after Cardiac Arrest without ST-Segment Elevation (COACT).  This study had a fatal flaw: they did not keep track of all the "Non-STEMI patients" who were NOT enrolled, but instead were sent for immediate angiogram.  It was done in Europe, where the guidelines suggest taking all shockable arrests emergently to the cath lab.  So it is highly likely that physicians were very reluctant to enroll patients whom they suspected had Occlusion MI (OMI), even if they did not have STEMI. These physicians did not want a patient with an OMI that was not a STEMI to be randomized to no angiogram.  This strong suspicion is supported by their data: only 22 of 437 (5.0%) patients in this study had OMI.

What percent of shockable arrests without STE have an OMI?

5% vs. 58%!!  It is clear that there was signficant enrollment bias in COACT.

We at Hennepin recently published this study

Sharma et al. (with Smith and others) found that among patients with shockable cardiac arrest who had OMI, the initial and subsequent pre-angiogram ECG were only 75% sensitive for OMI, with similar specificity.

Serial ECGs are of paramount importance.

Ventricular fibrillation cardiac arrest should prompt consideration of cardiac catheterization. This case is an example in which the post ROSC ECG does not show STEMI but is indicative of OMI nonetheless. These are the post arrest patients who certainly benefit from emergent cath.

Lead aVL is useful when evaluating for reciprocal changes in the setting of suspected inferior lead ischemia.

Applying the Above to Today’s Case:

Drs. Raj, Meyers, Smith and myself all independently assessed ECG #1 (which I have reproduced for clarity, together with the follow-up tracing in Figure-1).

There is general agreement among experienced clinicians as to whether a given ECG satisfies millimeter-criteria for an acute STEMI or not. As a result — the phenomena of inter- and intra-observer variability in ECG interpretation rarely come into play. 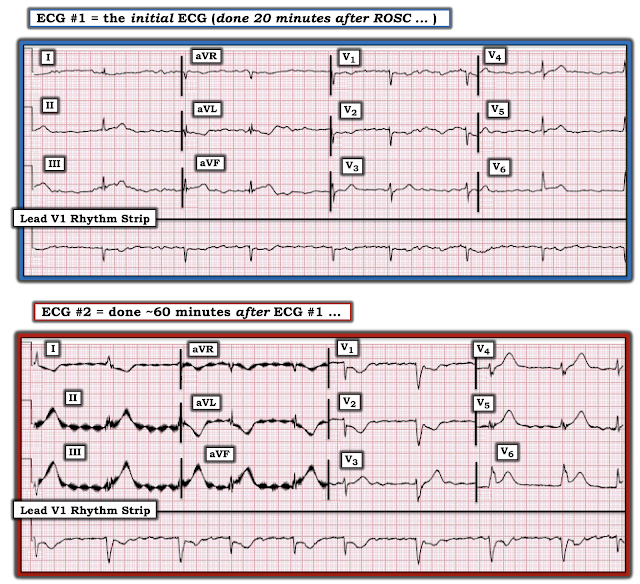 Figure-1: The 2 ECGs shown above in today’s case (See text).

MY Thoughts on ECGs #1: As noted earlier — there is significant baseline wander + artifact in ECG #1. Nevertheless — it is possible to interpret this tracing, which was obtained ~20 minutes after ROSC following VFib cardiac arrest.

ECG #1: Putting It All Together — Suspicious ECG findings are seen in no less than 8/12 leads in ECG #1. While possible that the suboptimal technical quality of this tracing might account for erroneous signals from a couple of leads — I find it hard to ignore suggestions from 8/12 leads in this patient who has just been resuscitated from VFib cardiac arrest. Taken together — the findings in ECG #1 are telling us why this patient had VFib.

MY Thoughts on ECGs #2: As always — it’s insightful to compare serial tracings, especially once clinical follow-up is available. We can learn a lot by going back to our interpretation of the initial tracing, to see what the early abnormal findings looked like in ECG #1, and what they became in ECG #2! 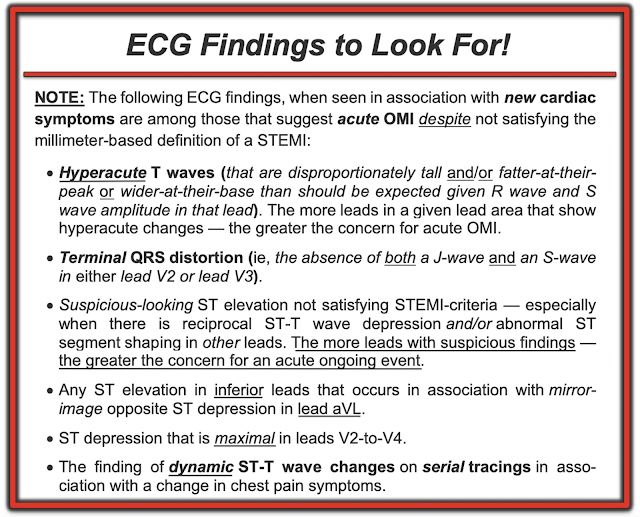 Figure-2: ECG findings to look for when your patient with new-onset cardiac symptoms does not manifest STEMI-criteria ST elevation on ECG (See text).

Final LEARNING Point: Our purpose in developing criteria for predicting OMI when millimeter-based STEMI criteria are not satisfied — is to hopefully minimize the potential for inter- and intra-observer variability when interpreting acute tracings.