Wide Complex Tachycardia in a 20 something.

This was sent by a former resident.  He will remain anonymous because his identity could compromise patient confidentiality.

A 20-something female presented with palpitations and lightheadedness.  She had no previous medical history except for some "in utero tachycardia" which was treated until a very early age.  She has had no problems since and takes no medications.  She has no specific conduction abnormality diagnosis.

Her mother states she is not thinking clearly ("acting as if she is intoxicated").  The patient reports exertional syncope and was syncopal on the way to the triage desk.


The rhythm strips, which unfortunately were not recorded, reportedly showed irregularity, with a rate varying from 180-250.

Because of this irregularity, the treating physician was worried about Atrial fibrillation and WPW, and therefore was reluctant to give adenosine.

See here for a discussion of Atrial fib and WPW, and the danger of adenosine and of other AV nodal blockers, and of the safety of these medications if it is NOT atrial fibrillation.

What would cause this rhythm but have some irregularity on the rhythm strip?  Could this be atrial fibrillation?  Is adenosine really contraindicated?

Procainamide was administered.  There was no response.

Electrical Cardioversion was the next step.  As the BP was stable after some fluids, low dose propofol  (60 mg) was used for sedation.

Synchronization was turned on; here it is:

Cardioversion was done at 200J biphasic.

Here is the result:

There was a pulse, so it must be Polymorphic VT.  The BP was 70 systolic.  She was given 2 g of Mg, and defibrillated at 200 J biphasic.  Here is the result:

After a couple defibrillations, there was conversion back to a wide complex tachycardia:

Color and BP were improving and she was awakening.

This was done without success.

She reverted to V Fib again:

She remained on the esmolol drip and had no more dysrhythmias.  Cardiac MRI was normal.  Echo was normal.  EP study was done.  See below.

Was there an irregular rhythm?  We must take the word of the physician.

What else could it be?

In this scenario, the dysrhythmia is antidromic AV reciprocating tachycardia (AVRT) that goes down the accessory pathway and up either one of two AV node pathways.  The resulting rate depends on which pathway is used.

Here are some schematics that were nicely drawn by the physician:

Add an Accessory pathway to the mix: 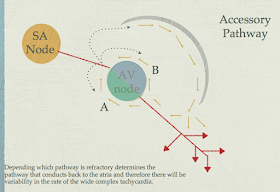 Ablation of the Bypass tract (Accessory Pathway) was completed.


How would I have managed this?

I would have attempted adenosine.  It is not atrial fib with WPW.  If it is VT, adenosine will be safe.   It might work.  If adenosine does not work, then cardiovert.

I believe adenosine would have worked here.

I have talked with Ken Grauer about his comments below.

We are now agreed that this was indeed a wide complex tachycardia due to antidromic WPW.

Fascinating case — that was first published back in February, 2015 — and which Dr. Smith is reposting today because of its “timeless nature”. I find it always interesting to review tracings previously interpreted — since sometimes what we said earlier might not be what we think now. There are 2 reasons for this: i) Intra-observer variability (in which the same interpreter when given the same tracing at a later time says something different …). The literature suggests this occurs ~10-20% of the time in expert interpreters; and, ii) We may have learned something since the time that we first interpreted the tracing! So it is humbling for me to see how my interpretation today ( = May 30, 2018) differs from what I said in my 2 February, 2015 comments ...

DEAR READER: We welcome your Comments! Unfortunately — due to a recent marked increase in SPAM — we have had to restrict commenting to Users with a GOOGLE Account. If you do not yet have a Google account — it should not take long to register. Comments give US feedback on how well Dr. Smith’s ECG Blog is addressing your needs — and they help to clarify concepts of interest to all readers. THANK YOU for your continued support!